Today, July 23-Waiting for the return of He Sápa 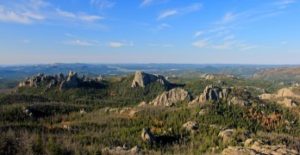 The Fort Laramie Treaty of 1868 explicitly provides the land that encompasses the Black Hills in South Dakota to the tribes that make up the Great Sioux Nation. The U.S. Supreme Court reaffirmed that fact in 1980. The federal government still retains control over the land after seizing it when gold was discovered. Now, more than $1 billion is set aside in a trust to buy the land from the tribes, who say it’s not for sale. The land continues to reap profits for the government and for the companies allowed to extract minerals and other resources. Resistance to President Trump’s recent appearance at Mount Rushmore is only the latest battle over what the Lakota know as He Sápa.