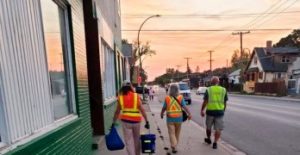 Groups of Native civilians are helping watch over reservation communities and urban Native neighborhoods. In Minneapolis, the American Indian Movement was instrumental in protecting properties during the unrest following the death of George Floyd. Now, volunteers are patrolling that city’s Little Earth community. In Regina, Canada volunteers with the non-profit White Pony Lodge walk the streets of the predominantly Native North Central neighborhood that experiences high rates of gun violence and Native gang activity. They pick up trash and used needles. They are ready to administer aid to drug overdose victims. They’re known for giving out fresh-baked bread to people they meet up with. We’ll talk with organizers about their efforts to help make their communities safer.