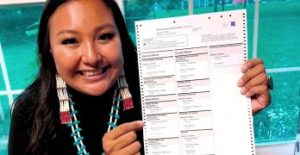 The four Native Americans currently in Congress are poised for re-election in November. And there are dozens of other new Native candidates to keep an eye on all over the country. One, Christina Haswood (Diné), won her primary race and is the presumptive winner since she has no challengers for the Kansas House of Representatives seat. If elected, the 26-year-old will be the youngest sitting legislator in the state. She’s one of four Native candidates in Kansas following the primaries. In Wyoming, Lynnette Grey Bull (Northern Arapaho/Hunkpapa Lakota) won the Democratic primary for the only congressional district in the state. Local media report she is the only Native woman to ever run for federal office in Wyoming. We’ll take a look at some notable Native candidates heading to November.