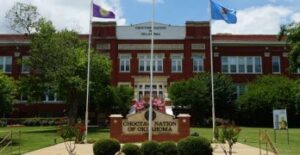 After the recent historic change in the Cherokee constitution opening the door to Black Cherokee citizenship, the Choctaw Nation is now facing a fight pitting sovereignty against formal recognition for Choctaw Freedmen. The chief of the Choctaw Nation opposes proposed language in congressional legislation that would require the tribe to allow Freedmen enrollment. The bill is in response to Freedmen—descendants of slaves who also claim Choctaw heritage—who say they are denied citizenship because of their race. But Choctaw Chief Gary Batton says the tribe, not Congress, determines enrollment. We’ll get an update on the status of the ongoing Choctaw Freedmen issue.