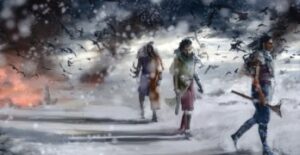 A new tabletop role-playing game focuses on Indigenous people in a future where colonization never happened. Coyote & Crow blew past the game designers’ $18,000 Kickstarter goal in 45 minutes, and currently is almost $500,000 and counting. The game joins a list of other mainstream role-playing games like Dungeons and Dragons that have their own Native following. We’ll hear from Native role-playing gamers who are passionate about playing these types of games.