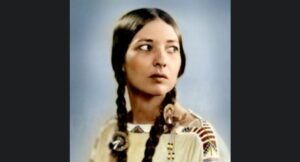 Mary Thompson “Te Ata” Fisher (Chickasaw) was an actor and storyteller and one of the very first ambassadors of Native culture on stages throughout the world from the 1920s until her death in 1995. Maria Tallchief (Osage) broke barriers as a ballerina, becoming prima ballerina of the New City Ballet, all while remaining outspoken for Native rights. They are among the Native women who create memorable art and provide inspiration for artists who come after them. During March, we’re celebrating historic Native women.