Today, May 12– Worthy of the hall of fame 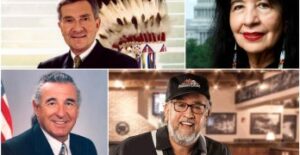 Some of the new inductees into the National Native American Hall of Fame this year include entrepreneur Dave Anderson (Chippewa), former U.S. Senator Ben Nighthorse Campbell (Northern Cheyenne) and Emil Notti (Athabascan) the first president of the Alaska Federation of Natives. The award is an opportunity to educate the general public about notable Native Americans and their contributions. We’ll talk with the Hall of Fame founders about the importance of the award and what it takes to make the list.