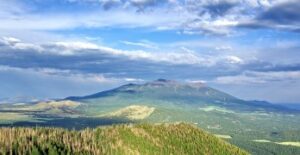 Certain hills, mountains, valleys, forests and rivers are among some of the most sacred spaces for Indigenous culture and spirituality. They are included in creation stories. They include places like Oak Flat, San Francisco Peak, the Grand Canyon, South Mountain and the Blythe Intaglios. But many of those places are not controlled by tribes. They fight to protect sacred places from local and federal governments, private landowners and resource development companies. A series of articles by the Arizona Republic finds Western laws about land ownership and what is considered sacred stacks the deck against tribal interests. We’ll hear about the series and from some of the people who continue to work toward protecting sacred land.

To join the discussion call,