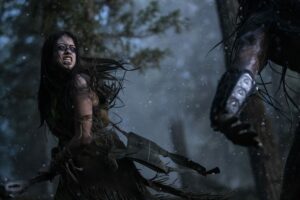 Move over Arnold Schwarzenegger and Danny Glover, Amber Midthunder (Sioux) is the new hero of the Predator sci-fi franchise. “Prey” will be released on Hulu Friday, August 5. The story takes place 300 years ago as a female Comanche warrior battles a Predator, a species of alien with a knack for hunting other dangerous species, to protect her tribe. The film is in English and dubbed in the Comanche language, with the help of the Comanche Nation. Friday on Native America Calling, Shawn Spruce talks with Amber Midthunder, her breakout co-star Dakota Beavers (Pueblo descendant and Mexican), producer Jhane Myers (Comanche and Blackfeet), and director Dan Trachtenberg about the film and how awesome it is to see how our ancestors would’ve fought back against a highly evolved alien hunter.