Today, August 16 – The legacy of Elvis for Native Americans 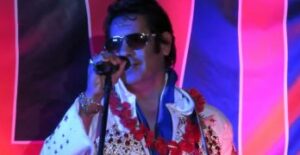 During his peak, Elvis Presley’s appeal crossed cultural boundaries. His profound popularity continues to resonate with many Native Americans, including a handful who are Elvis impersonators – and a hilarious reference on the hit series Dark Winds. On the anniversary of his death in 1977, Shawn Spruce checks in with Elvis fans about what the King of Rock and Roll means to them these many years later.