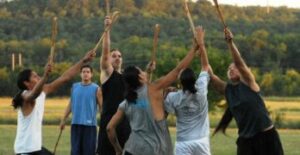 Stickball is the older, rougher cousin of lacrosse, developed many centuries ago as both a game and a training exercise. The U.S. government once deemed stickball one of the cultural connections they needed to eliminate in the effort to assimilate Native children through missionary-run boarding schools. The game survived that assault and keeps gaining momentum, played by local clubs and in competitive national tournaments. We learn about the origins and growing future for the nation’s oldest team sport with Mike Slee (Eastern Band of Cherokee Indians), stickball player for the Walelu Cherokee Indian Ball team and the director of operations for the Museum of the Cherokee Indian; Miranda Long Stamper (Creek and a citizen of the Eastern Band of Cherokee), teacher, coach and stickball player; announcer and player Jeremy Bell (Mississippi Band of Choctaw member); and Casey Bigpond (Mississippi Band of Choctaw member), cultural revitalization specialist for the Mississippi Band of Choctaw Indians.