Today, May 28 – Polar bears caught on the middle 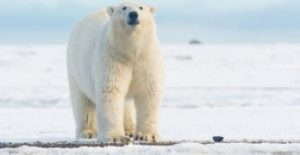 Polar bears have a strong cultural significance for Alaska Natives and Indigenous people of the Arctic. They’re a food source and are included in traditional stories throughout Alaska and northern Canada. They are the top predator in their food web. Now they are listed as threatened under the U.S. Endangered Species Act. Melting ice caused by climate change is changing polar bear habitat, forcing them away from their main method for gathering food. As a symbol of climate change, they’re in the middle of debates over natural resources and climate change policy. We continue our series on the cultural and environmental importance of animals with a look at polar bears, their relationship to Indigenous people and their struggle for survival.