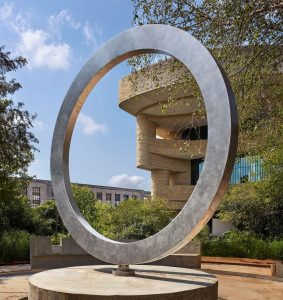 The National Museum of the American Indian will open the new National Native American Veterans Memorial Today. The moment will be marked with a short virtual message to honor the service and sacrifice of Native veterans and their families. The message will be on both the museum’s website and its YouTube channel.

“The National Native American Veterans Memorial will serve as a reminder to the nation and the world of the service and sacrifice of Native American, Alaska Native and Native Hawaiian veterans,” said Kevin Gover, director of the museum. “Native Americans have always answered the call to serve, and this memorial is a fitting tribute to their patriotism and deep commitment to this country.”

The memorial, which sits on the grounds of the museum, was commissioned by Congress to give “all Americans the opportunity to learn of the proud and courageous tradition of service of Native Americans in the Armed Forces of the United States.” Native Americans have served in every major military conflict in the U.S. since the Revolutionary War. This will be the first national landmark in Washington, D.C., to focus on the contributions of American Indians, Alaska Natives and Native Hawaiians who have served in the military.

The memorial design is by Harvey Pratt (Cheyenne and Arapaho Tribes of Oklahoma), a multimedia artist, retired forensic artist and Marine Corps Vietnam veteran. The design features an elevated stainless steel circle resting on a carved stone drum. It also incorporates water for sacred ceremonies, benches for gatherings and four lances where veterans, family members, tribal leaders and others can tie cloths for prayers and healing.

The museum planned to host a dedication ceremony and veterans’ procession to mark the memorial’s completion but postponed those events due to current health and safety guidelines. The museum will reschedule both events when it is safe to do so.

Major support for the National Native American Veterans Memorial has been provided by the Cheyenne and Arapaho Tribes; Chickasaw Nation; Margaret A. Cargill Philanthropies; Poarch Band of Creek Indians; San Manuel Band of Mission Indians; and Shakopee Mdewakanton Sioux Community. The memorial has also been widely supported by tribal governments and tribal veterans organizations. More than 85 tribes, individuals, corporations and other organizations have contributed to the memorial.

Why We Serve: Native Americans in the United States Armed Forces Book and Exhibition

To coincide with the completion of the National Native American Veterans Memorial, the museum has published Why We Serve: Native Americans in the United States Armed Forces, a 240-page book that commemorates the history of Native American military service. Native Americans serve in the military at one of the highest rates of any ethnic group, and the book explores the many reasons why—from love of home to the expression of warrior traditions.

The museum will host a virtual discussion with Harris about identity and the warrior stereotype of Native people serving in the military, as well as actual—and remarkable—traditions of peace and war within American Indian communities. The event takes place Thursday, Nov. 12, at noon EST. Details for registering for this Zoom event are available at AmericanIndian.si.edu.

This module, part of the museum’s Native Knowledge 360° educational initiative, honors the legacy of Native Code Talkers who created secret military communications based on their languages. Their efforts significantly aided Allied victories during World Wars I and II.

The Library of Congress’ American Folklife Center collects, preserves and makes accessible the personal accounts of American war veterans so future generations may hear their stories and better understand the realities of war. In partnership with the museum, the project is preserving the stories of Native men and women who have served in the military through interviews, correspondence and photographs.

In partnership with Native peoples and their allies, the National Museum of the American Indian fosters a richer shared human experience through a more informed understanding of Native peoples. The museum in Washington, D.C., is located on the National Mall at Fourth Street and Independence Avenue S.W. Connect with the museum on Facebook, Twitter, Instagram and AmericanIndian.si.edu.