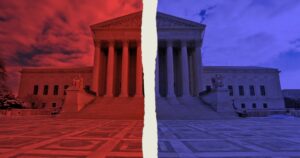 Because federal judges are nominated by the president and confirmed the U.S. Senate, inevitably the process is somewhat politicized. But as hyper-partisanship has corrosively swept across American life, we’ll explore whether our judiciary has been infected.

The Constitution’s framers well understood that democracy is chaotic and messy. And they designed the judiciary to be relatively insulated from the volatility of our fractious politics. “The complete independence of the courts,” wrote Alexander Hamilton in the Federalist Papers “is particularly essential in a limited Constitution.” Lifetime appointments of federal judges and a respect for jurisprudential precedent were intended to promote stability.

It’s an incredibly important thing for the court to guard this reputation of being fair, of being impartial, of not being simply an extension of the terribly polarized political environment.”

Our documentary project will examine whether this central characteristic of the judiciary is undermined by America’s present state of politicization – now touching practically every aspect of our society, from popular culture to public health.