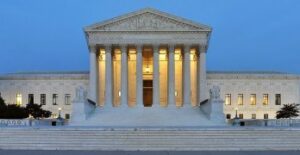 A U.S. Supreme Court decision in March, 1978 continues to hinder tribal sovereignty on a daily basis. The ruling in Oliphant v. Suquamish Indian Tribe stripped tribes of most criminal prosecutions against non-Indians. Those cases became the responsibility of the federal government. In his dissent, Justice Thurgood Marshall wrote “I am of the view that Indian tribes enjoy, as a necessary aspect of their retained sovereignty, the right to try and punish all persons who commit offenses against tribal law within the reservation.” The Violence Against Women Act was an attempt to remedy the persistent trend of non-Native abusers of Native women slipping through the cracks of the federal justice system. We’ll look at the distressing consequences of Oliphant and efforts through the years to fix it.