Today, April 19– Will the Biden Administration act on DAPL? 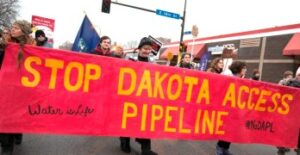 Tribal leaders and climate activists are at odds with the Biden Administration after a missed opportunity to shut off the flow of oil in the Dakota Access Pipeline. Since the end of the DAPL-supporting Trump Administration, opponents of the pipeline saw a recent federal court hearing as a key chance for Biden to set a new course for the future of the project. Instead, the U.S. Department of Justice neglected to weigh in one way or the other. Biden has already nixed the controversial Keystone XL pipeline expansion and temporarily halted new oil and gas leases on federal land. What does the next four years hold for the direction of the controversial DAPL project?