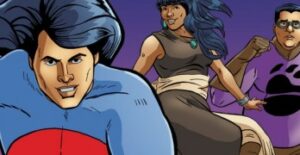 Hubert Logan, Wampum Baggs, Blud Kwan’Tum and the other characters created by Arigon Starr (Kickapoo Tribe of Oklahoma) are coming back to life in an audio podcast. It’s full circle for the Super Indian cast that started as radio theater in 2006 distributed by Native Voice One. Starr then developed the idea into a graphic novel. Now the enterprising writer, artist and musician revives the Super Indian story with three installments of a streaming audio podcast. We’ll catch up with Starr as she re-introduces the “Super Indian” team.