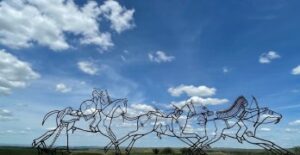 The Battle of Greasy Grass was over in an hour, but its legacy continues to this day. The fight continues over how the story is told and who deserves honors after the major defeat of the U.S. Army’s 7th Cavalry on the banks of Montana’s Little Bighorn River on this day in 1876. The combined force of the Oceti Sakowin along with other tribes ended Lt. Col. George Armstrong Custer’s repeated violent attacks in violation of the Treaty of Fort Laramie. We’ll go over the history of the battle and its reverberations 145 years later.