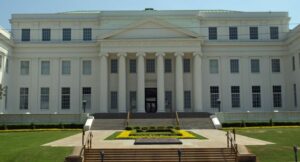 The Alabama Department of Archives and History is the latest institution going through a repatriation process starting this month. The museum, which has dozens of human remains and hundreds of Indigenous funerary objects in its collection, hasn’t been in compliance with the Native American Graves Protection & Repatriation Act (NAGPRA) of 1990. And in Montana, several items were repatriated from the University of Missoula and will now be in the care of the Fort Peck Interpretive Center. Several other institutions still have collections containing thousands of human remains and objects that fall under NAGPRA but it’s been slow work to get actual objects back into the care of tribes. Listen to with repatriation advocates about current efforts.