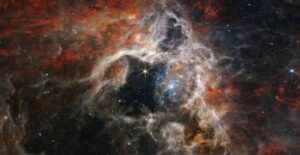 Nicole Aunapu Mann is scheduled to become the first Indigenous woman in space later this month with the launch of NASA’s SpaceX Crew Dragon. The Wailacki Nation astronaut is headed to the International Space Station as the mission commander. The space flight also comes as NASA’s new James Webb Space Telescope is providing awe-inspiring images and scientific revelations that promise new insights into the origins of the universe.  We hear from Native NASA scientists and engineers about how Native people are playing bigger roles in major space exploration advances.