Today, June 1 – Putting the death of Colten Boushie in context 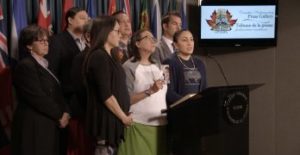 Director Tasha Hubbard’s (Cree) 2019 film “nîpawistamâsowin: We Will Stand Up,” is picking up accolades and new attention from filmgoers. It recently won the 2020 Ted Rogers Best Feature Length Documentary at the Canadian Screen Awards. It recounts the story of Colten Boushie (Cree from Red Pheasant First Nation) who was shot to death after he wandered onto the property of a white farmer in 2016. His death and the acquittal of the man who shot him prompted concern, frustration and anger among First Nations people in Canada. Hubbard puts the shooting in context of the broader racial and cultural divide and her own personal experiences.