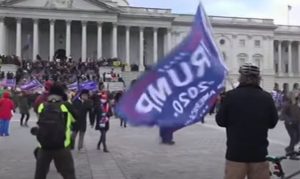 Spurred by unfounded and dangerous rhetoric, a mob of Donald Trump supporters pushed past police and stormed the U.S. Capitol Wednesday. The images, video and messages from the violent scene are jarring: tear gas deployed in the Capitol rotunda; law enforcement officers, with guns drawn, barricade the doors of the U.S. House of Representatives while people inside take cover; members of Congress either evacuating or barricading themselves in their offices. The violence interrupted the Senate’s certification of Joe Biden’s electoral victory in the presidential election, but it also strikes a blow against the peaceful transfer of power Americans take for granted. Trump denounced the violence, but referred to the protesters as ‘very special.’ We will take listeners’ calls and get perspectives from Native political watchers to get reactions on the violence and look ahead for possible strategies for healing the divide.