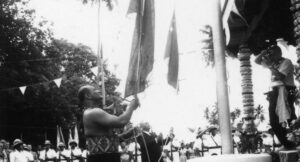 Use Up/Down Arrow keys to increase or decrease volume.

This month marks the 60th anniversary of Samoa’s independence from colonial rule. Self rule came to the Pacific island nation in 1962 after decades of frustration with occupation by New Zealand and Germany before that. During those times, Samoans had little say in the administration of their own people – and their culture and language were systematically diminished. Now, Samoa thrives and works to revitalize the core elements of their identity. Today on Native America Calling, Shawn Spruce speaks with Brian Alofaituli, PhD, senior lecturer in the Archaeology and Cultural Heritage division at the Centre for Samoan Studies at the National University of Sāmoa; Rev. Samuel F. Unutoa, honorary board member for the Alaska Samoa Community Corporation; and Maddy Unutoa, Alaska Samoa Community Corporation president and CEO.