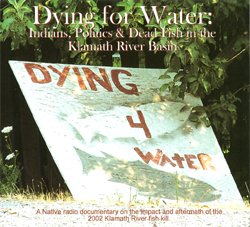 Dying for Water, Indians, Politics and Dead Fish in the Klamath River Basin was co-produced by the Northern California Cultural Communications and KIDE-FM.  The program started production the day after the 2002 Fish Kill when over 68,000 adult Salmon died because of not enough water was released from Iron Gate Dam on the Klamath River to sustain their annual spawning.  This program was released in 2005 as local tribes combined efforts to raise attention to the need for the dams on the Klamath river to come down.